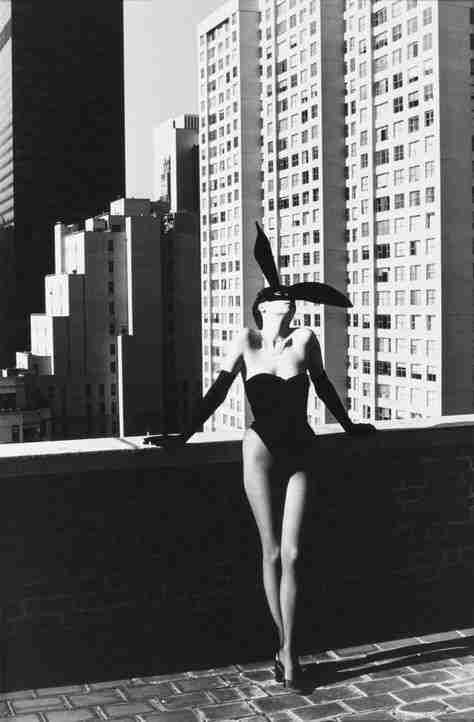 Fashion has largely existed on the periphery of the ‘art world’ – or else disappeared from it entirely – for centuries. Fashion, previously assigned to the fields of “design” or “craft”, has only in the last decade entered the halls of museums at market exhibitions as true works of art in their own right.

Instrumental in the development of this overlap between art and fashion is the contribution of a host of talented fashion photographers whose sense of composition, innovation and avant-garde helped bring fashion into the realm of fine art. Meeting five of these iconic fashion photographers, Barokní dům highlights how fashion and art came together.

Born in Berlin, Germany in 1920, Helmut Newton began to develop his artistic talent at a young age, during the 1930’s. After fleeing Nazi Germany, he immigrated to Australia, where he began his career as a professional independent photographer, working most notably for Playboy and Vogue. His photographic language mostly consists of striking black and white images that are known for their erotic, provocative, and even fetishistic nature. Due to his work in a primarily black and white medium, Newton often took careful consideration of the effects of light, line and composition in his images. It is this streak within his practice that is reminiscent of some of the most famous masters of light, such as the Dutch painter Johannes Vermeer. Helmut Newton went on to win various prestigious awards and accolades, such as the Grand Prix national de la photographie (National Grand Prize for photography, France). Despite emigrating at an early age, the renowned photographer never forgot his roots, and donated 1000 of his works to his native city and founded the Helmut Newton Foundation in Berlin three months before his death in 2004.

American photographer Annie Liebovitz was born in Conneticut in 1949. Whilst she was still a student of painting in the late 1960’s, Liebovitz started taking courses in photography in the evening. She began to work frequently for renowned publications such as Rolling Stone early on in her career, becoming its official photographer at only 23 years old. The famed photographer is known most notably for her portraits of celebrities–primarily musicians and actors–but also for her work with artists such as Keith Haring (see above) and even Queen Elizabeth II herself in 2007. Her works are often theatrical in nature–daring, but also intimate, revealing both the grandeur and the gentleness of a personality.

This photo of Keith Haring, taken in 1986, was commissioned by a magazine in Florida, which folded before its publication. The image was therefore largely unrecognized until recent years. In the work, Liebovitz takes the combination of art and fashion to a literal level, allowing the renowned American artist to paint himself and the set. The image plays with ideas of boundaries (where does the artist end and the background begin?), the act of revealing versus concealing, and the way the lines of Haring’s distinctive style create a striking visual illusion of perspective. The discussion around art and fashion is furthered by the concept of paint itself as a layer of clothing. Haring stated that in his nude, painted state, he felt dressed, and the pair took to the streets of New York in the mid-winter, Haring dressed in nothing but his own artwork.

Nick Knight is an esteemed British photographer who was born in London in 1958. Whilst he was still a student of photography at Bournemouth and Poole College of Art and Design, he published his first book of works, Skinheads, which caught the attention of i-D Magazine. This effectively launched Knight’s career in the fashion sphere.

Knight is most known for his collaborations with fashion designers Yohji Yamamoto, John Galliano, and the beloved late Alexander McQueen. Knight’s works are often marked with drama, tinged with a dark or brooding tension. The photographer’s use of technology in combination with his artistry often results in stunning edits that appear otherworldly, expanding the conversation on what is considered beautiful or worthy of one’s gaze in the fashion sector.

Juergen Taller was born in Germany, where he studied photography before moving to London at the age of 22. He has worked with almost all the major fashion publications, and frequently collaborates with fashion brands Celine, Vivienne Westwood and Helmut Lang. He has frequently photographed various celebrities such as the musician and fashion icon Björk, super models such as Kate Moss and Gisele (see above), and even artists such as Roni Horn.

The artistry of Teller’s photography is in its distinctive style. The German photographer often opts for a raw, almost visceral aesthetic to his works, using untouched flash photography to expose his subjects in all their vulnerability. The models in his photographs are often found in unusual, even unflattering poses, further commenting on the offbeat quality of human nature and the triviality of ‘perfection’ in fashion.

Tim Walker is a renowned British photographer born in 1970. A first photo shoot with Vogue at the age of 25 launched his professional career as a photographer, and he has since worked for almost all the major fashion publications, celebrities, and fashion designers. Walker seems to have perfectly straddled both the art and fashion spheres, as he has already had two solo exhibitions of his photographic work at the Design Museum and Somerset House in London, with a third solo exhibition opening later this year at the Victoria and Albert Museum (Tim Walker: Wonderful Things, opening 21st September, 2019) .

Indeed, Walker’s oeuvre is well-known for its fantastical nature and warped reality. The composition of his images with a twisted perspective and an almost fishbowl effect in the picture plane often convey a surreal or magical landscape. And yet, contrary to this extravagant style, Walker also excels in capturing pared-back, minimalist portraits of designers and celebrities, allowing the viewer to face a subject directly, engage eye contact, and see straight into a creative soul.