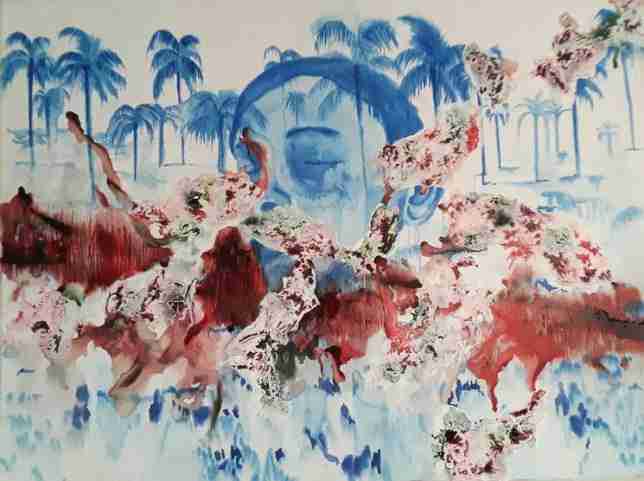 The concept of contemporary African art is often difficult to define. But for good reason; the continent consists of 54 countries, each with its own unique culture, tradition and social structure.

Moreover, the large diaspora caused by colonialism further complicates this definition. For this reason, it is impossible to define a precise idea of ​​contemporary African art. There are several key factors that we can look at to understand what has made the African art scene what it is today.

The Baroque House will introduce you to the origins of contemporary African art, its journey to the mainstream and a bit of what the scene looks like today.

The origins of contemporary African art: Négritude and Post-Colonialism

Négritude was primarily a literary movement led by the writers Aimé Césaire, Léon Damas and Léopold Sédar Senghor. It played a huge part in the development of modern African art, and subsequently contemporary African art. Founded in 1937 by a group of African student artists in Paris, a city with a tolerant and diverse art scene, the movement grew globally. The movement aimed to critique colonialism and cultivate an appreciation for black and African culture. According to Léopold Sédar Senghor, in order for African art to progress it had to reflect the modernity of the present by responding to contemporary social issues and artistic styles, while celebrating traditional culture.

Visual art within the movement focuses on these key principles. It also draws inspiration from other Modernist movements such as the Harlem Renaissance and Surrealism. One of the most significant visual artists of the movement is Guyanese painter Aubrey Williams. The artist frequently used abstraction as a means to avoid being stereotyped into a Westernized, narrow view of African art. Furthermore, the subject matter of his work is often criticism of colonial regimes. For instance, his painting Death and the Conquistador explores the savagery of the Spanish colonization of the Americas.

Decolonization was a lengthy process, spanning a 50 year period, until South Africa’s eventual independence from a white-ruled government in 1994. In the aftermath of Negritude and colonial criticism, African artists began to experiment with new art styles and explore new themes that arose in this period of fundamental change.

In addition, a shift away from abstraction towards conceptual art was made.

One prominent style was found-object art. This art created with found and recycled materials remains a popular art form on the continent today. One key found-object artist is anti-war activist and sculptor Gonçalo Mabunda from Mozambique. Mabunda creates his works from weapon parts collected by the Christian Council of Mozambique after the 20 year civil war. Through his art, he transforms death into new life.

In the late 20th century, several African art exhibitions in the West were instrumental in popularizing African art. In 1989, the Center Pompidou in Paris debuted the exhibition “Magiciens de la terre”. It explored various kinds of art from outside the Western world. This exhibition was the impetus for several other key African exhibitions. which aimed to educate and celebrate contemporary African art and artists. One example is “Seven Stories about Modern Art in Africa” exhibited in 1995. Curated by African curators at the Whitechapel Gallery, it exhibited the artworks of 60 artists as a guide to African modern art history.

The Contemporary African Art Scene in 2023

The recent boom of African art in the market has lead to huge investment on the continent. An increasing number of artistic venues are being established, and many more art fairs and exhibitions are being held on the continent itself.

Another hub of contemporary African art is the Museum of African Contemporary Art Al Maaden in Marrakech, Morocco. Founded in 2018, the art museum is home to an incredible permanent African art collection. As well as this, it hosts a diverse range of rotating exhibitions featuring African artists.

Many African countries’ national museums are also home to expansive collections of traditional, ancient and tribal African art. One such example is the Cairo Museum in Egypt, home to the world’s most complete collection of Egyptian art.

African Artists on the Rise

African artists in the wake of fundamental change have only further diversified their use of art styles and mediums. In the spirit of Negritude and post-colonialism, they continue to explore the complexity of African identity in 2021.

Franco-Beninese artist Leslie Amine is heavily influenced by African diaspora. She explores the themes through her work of race, being biracial, and split cultural identity through her dreamlike, colorful paintings.

Meanwhile, Gabonese photographer Yannis Davy Guibinga uses his art to document a new generation of Africans who unapologetically celebrate their cultural heritage in spite of Western cultural imperialism. He rejects the narrow Western-gaze mold of African identity and instead highlights the diversity of African identity.

Although undergoing rapid expansion, contemporary African art remains only a tiny part of the art market, still in recovery from the cultural and economic damage caused by centuries of colonialism. However, with the incredible array of contemporary artists emerging from the continent, as well as the development of contemporary cultural spaces, there’s no doubt that this is only the beginning of a world-leading art scene.